Face-to-Face with a Grizzly Named Cancer

Face-to-Face with a Grizzly Named Cancer 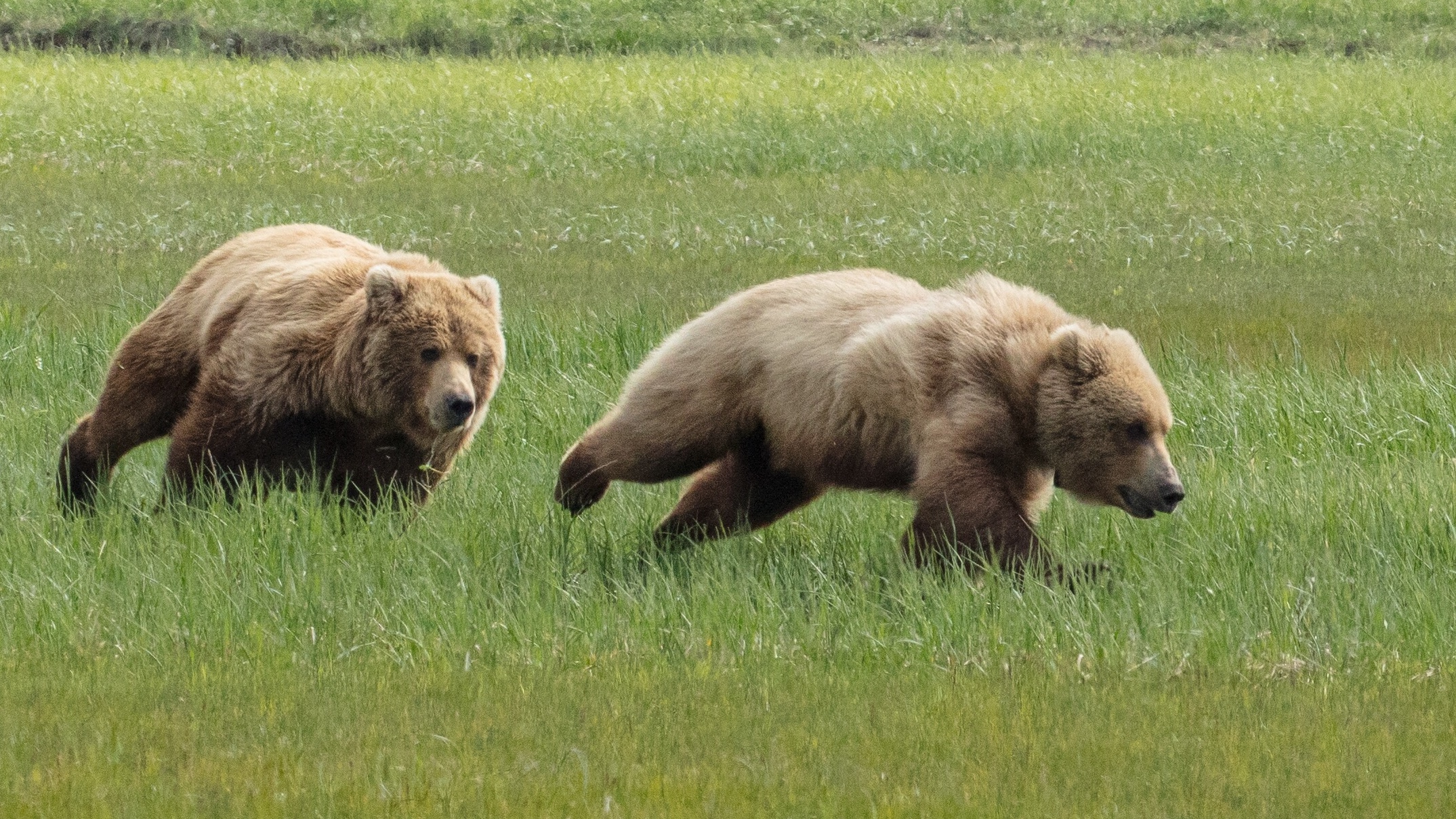 To come in close proximity to a grizzly has got to be one of life’s defining moments. It’s definitely a David and Goliath moment. Last year, HOTY and I had the amazing opportunity to celebrate our 30 years of marriage with a dream trip to Alaska. I have to admit, this was NOT my dream trip. That is because my dream trip involves warm water, white sand, a lounge chair, and unlimited fuzzy drinks with paper umbrellas. No, this was my man’s dream trip. A trip of a lifetime for him as a professional photographer and one who likes to experience nature IN nature – not from a distance. Off the beaten trail on an adventure has been our life for 30 years and this trip was no different. We took a small plane into the open wilderness where humans rarely dare to tread. We went with a guide who we expected would have a gun, but after we arrived we learned he only had a flare. Not even a flare gun, just a flare! Great! Well, the photos would be worth it!! Whatever IT is.

As we crossed the mile or so of grassland mixed with streams that flowed to the ocean, we encountered large bear paw prints, but the beast remained elusive. Then, as if placed by a mysterious bear-placer, there they were! A mama and her two cubs with her watchful eye on the surroundings that we occupied. Our guide told us that a male grizzly would love to kill her cubs. So, discerning between us and another grizzly was of prime importance to us. That “get out of my way or die” mama bear instinct has risen up in me a number of times and I was hoping that she wasn’t engaging that instinct and if she was, we wouldn’t be her target. So, with cautious observation, we clicked away on our camera gear as if not to miss a beat. She kept her cubs close to her and at once we realized that we were center stage to half-a-dozen other grizzlies. We were surrounded on all sides! Words can not describe the awareness of being in their environment with nothing to shoot but a camera. And yet, it was as if they didn’t care that we were there. They sparred with each other in lover’s triangles. They grazed peacefully on the tall grass. They sauntered in and out and around us. At one point one female chased another female away from the desired male and blazed a path straight in our direction. The full-bore speed of an angry female and her foe were heading straight at us, like a train without brakes. Well, of course, we did what any normal human being would do. We froze. Holding our breath, only moving our shooting finger on the shutter button, we fired away at rapid speed. Then when they veered off to the right at the last minute, we breathed. Whew! No time to move or tremble. We just looked at each other with a smile knowing we just captured amazing shots!

Yep, I faced a grizzly, more than 800 lbs of raw strength and wildness. I didn’t even know it was on my bucket list, but it has become a highlight of my life. I now understand why adventure photographers will put themselves in very dangerous positions to get THE shot. It is exhilarating and addicting. Capturing THE shot far outweighs the danger. Before Alaska though, I had faced many sorts of grizzlies that tested my faith, strength, and depth of understanding of who God says He is.

One of the big grizzlies I have faced was homeschooling my kids. I literally went into it kicking and screaming, knowing that I couldn’t and shouldn’t do it. Many of us are ”called” into jobs that feel natural and doable. This calling (and it was definitely a calling, not an initial heart yearning) was a disturbance to my life, career, finances, and self. It was a calling that I had to choose to obey, without full understanding. Many of the women around me who were homeschooling their kids, knew before their babies were born that they were going to homeschool. Not me. That was never on my radar. I like to say that I came into it through the back door kicking and screaming. At that time, I would have emphatically told you that it was the hardest thing I have ever done (since then there have been even bigger Grizzlies). I homeschooled for almost 12 years, two kids whose learning disabilities collided with each other. These two kids didn’t learn the way I did, in fact, their ability to learn was contrary to each other. I spent many years perplexed and weary. In my crying out to God – pretty much yelling at God – I shouted, “God, you told me to do this! Where are you in it?” In a strange audible voice in my inner being, He answered, “I told you to do this, but I never said it would be easy. I will, however, take care of all the details.” I knew then that I had to continue. That the “hardness” was for my growth. He was going to mold me through all the difficulties, tears, joys, ah-ha moments, and even the failures. I stayed the course and can honestly tell you now that God gave me a precious gift to spend that kind of time with my kids. Yes, it was tough, but the Lord knew how much my soul needed that kind of time, even when I didn’t know it about myself. Stretching, growing, and yearning for more of God takes time. Climbing into the furnace as Daniel did, comes even in the form of a homeschooling table in our family room. It grows your faith and trust in an all-powerful, ever-knowing God. So that the next time, when the Grizzly is a foot taller, I could face him with greater confidence because I had bigger faith.

Grizzlies come and Grizzlies go. Some stay a long time, some only for a short while. However, I have found that each brings me to a newer understanding of God and how much He loves me. In the times that I have chosen obedience over my own understanding, God tames the grizzly just enough for me to grow. Even when I think the situation warrants the grizzly to grow, and change, and learn how to act differently, it’s actually me that needs the lesson. It’s me that God is wanting to shape and mold to be more like Him.

In April, I came face to face with a new kind of grizzly named cancer. God had prepared me though with the past dozen or so grizzly encounters. This one, like so many of the others, has left new scars. This time real physical scars. As I faced the news of cancer, I could stand shaking, but confidently next to my roaring lion, the Almighty Lord, who was going to walk me through the valley of grasslands and streams, protecting me every step of the way. Even though this Grizzly felt ten feet taller than the first one I met, it didn’t matter because God had increased my faith as I chose to abide in Him through each of the past challenging encounters.

I am now three-quarters of the way through my treatment (radiation is still around the corner). I have not felt like a fighter as I am sure many cancer patients do. In many ways, I feel like this process has been applying itself to me. That I am just a girl who is going through. Not with a gloom and doom attitude, but a “gotta get through” attitude. But today I can shout from the roof-tops, “I am CANCER-FREE!” Yesterday, HOTY and I, and my sister sat in a small, cold medical room waiting for my surgical oncologist. Before she even sat down she announced that I have had a “100% complete response.” WOW! I have not fought. God has fought. I am convinced that my doctor doesn’t get to utter those words very often to her patients. And yet, I took in the smile on her face as the words rushed out of her mouth. Knowing that it was very possible that her words could have been quite the opposite, I can honestly tell you that I did not fear either version. That is not like me. That is not natural for me. But it is natural for my God. He was still walking, sometimes carrying, me through no matter what the results were. But with a wide smile on my face, the news I did get couldn’t have been any better!

I don’t fully know, yet, why I had to face this Grizzly. Perhaps I never will. What I do know is this; Because of my cancer diagnosis, my daughter has been able to live her first semester away from us with my sister and her husband. A home that loves the Lord and makes no bones about it. That is grace and mercy poured out upon my daughter (of which she isn’t even fully aware) that would never have happened without cancer entering the scene. I also know that the young adults that we serve have gotten to see their big, bold prayers answered by a good God. And I do know that only God can be given the glory from beginning to end of this. I mean, from preparing me to hear the first declaration of cancer, to the long nights in the bathroom, to the exhilarating words that I am cancer free, He alone is to be praised, I have done nothing but the going through. He has done everything in the taking me through while touching every life I have encountered in the midst of coming face-to-face with this Grizzly.

6 People reacted on this